2020 marks the 100th anniversary of Japanese automaker, Mazda.  A century old brand who persevered to perfect the rotary engine and a brand who gave us the much loved Miata.  We take a look at the 100 years of Mazda and what makes it such a great brand from its creation in 1920 until 2020.

Believe it or not, Mazda started out as a Cork manufacturing company, originally known as the Toyo Cork Kogyo Co. Ltd. in 1920.  They later only produced a limited number of motorcycles until they rolled out their first automobile in 1931, the Mazda Go.  A three wheeled truck that bears resemblance to the front of a motorcycle.  It is commonly believed to be one of the earliest forms of auto rickshaw in the world.  Mazda used Mitsubishi’s sales network to distributes its range of three wheeler “truck” hence explaining the prominent red Mitsubishi three diamond logo on the side of the Mazda-Go. 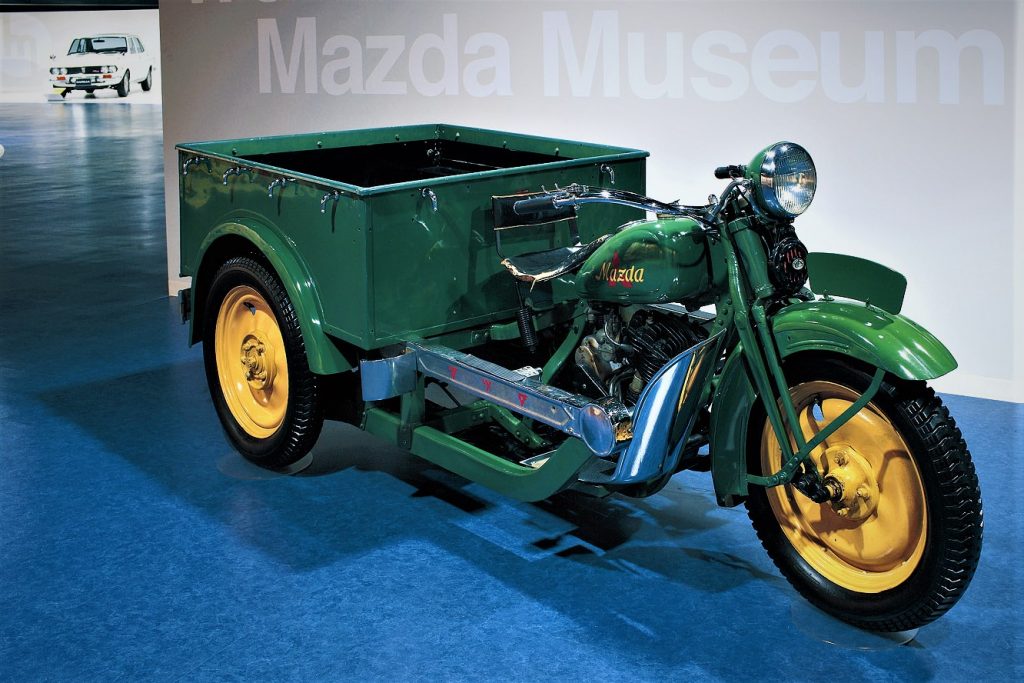 The Mazda Go, distributed through Mitsubishi’s sales network, is considered to be one of the the early forms of the auto rickshaw.

A Car For The Working Class

Mazda focused on producing a range of 3 wheels and 4 wheels utilitarian vehicles since the Mazda-Go.  It was not until 1960 that they released their first passenger car, the R360 coupé.  A 4 seat coupé priced to allow the working class the luxury of owning a car. 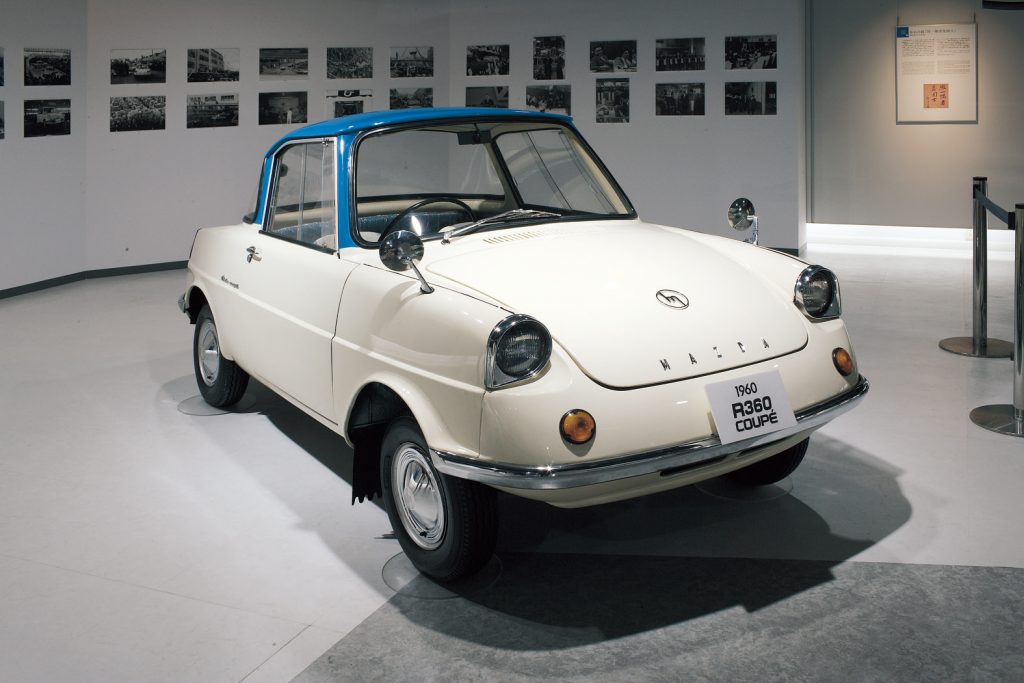 The Mazda R360 Coupé – A funky car for the people.

Mazda made it an objective for them to become market leaders and innovators in the 1960’s by commercialising the then flawed rotary engine.  Its main flaw was wear occurring within hours of operating the engine called ‘chatter marks’.  The difficulty in eliminating these ‘chatter marks’ made the dream of a rotary engine unrealistic.

The team of Mazda engineers persevered with their dream despite their loss of hope with the rotary engine.  Finally in 1967, they found a solution to the problem which resulted in the Mazda 110S commonly known as The Cosmos Sport.  A 110 horsepower 1967 car with a top speed of 185 km/h.  The car was updated to 128 horsepower reaching a top speed of 200 km/h a year later.  Since then Mazda has fitted the perfected rotary engine in many of its cars such as the RX -7 and RX-8.

In 1978, Mazda released the rotary engine powered RX-7.  A sports car produced for those who were “in pursuit of driving pleasure”.  The 2 door sport coupe was the only Japanese car at the time to feature pop up headlights to reduce drag.

First generation Mazda RX-7 – The first Japanese car to feature pop up headlamps at the time.

The third generation RX-7 is most recognised for being used in movies such as 2 Fast 2 Furious and Fast and Furious Tokyo Drift.  In the latter movie, Han drives the orange-black RX-7 fitted with a Veilside Body kit replacing the pop up headlamps.  Besides its use in Hollywood, what made it stand out was its displacement to the power it produced.  The third generation factory RX-7 developed as far as 276 horsepower from its tiny twin turbocharged 1.3 L engine.  High on power, low on displacement and hence low on road taxes. 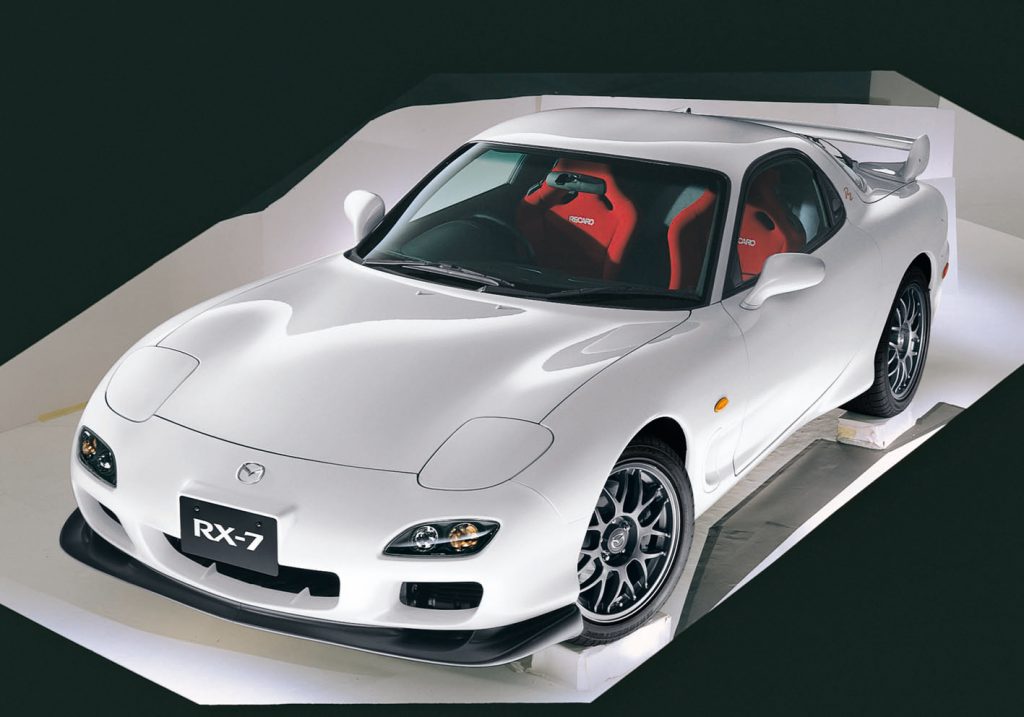 The MX-5 or more lovingly known, Miata is the most recognised and one of Mazda’s most successful cars ever.  Its introduction in February 1989 revived the dying demand for small light weight roadsters.  This triggered many other manufacturers to re-start production of such cars.  However Mazda has always remained on top of its game in this segment.  In 2016, it just sold its 1 millionth Miata. 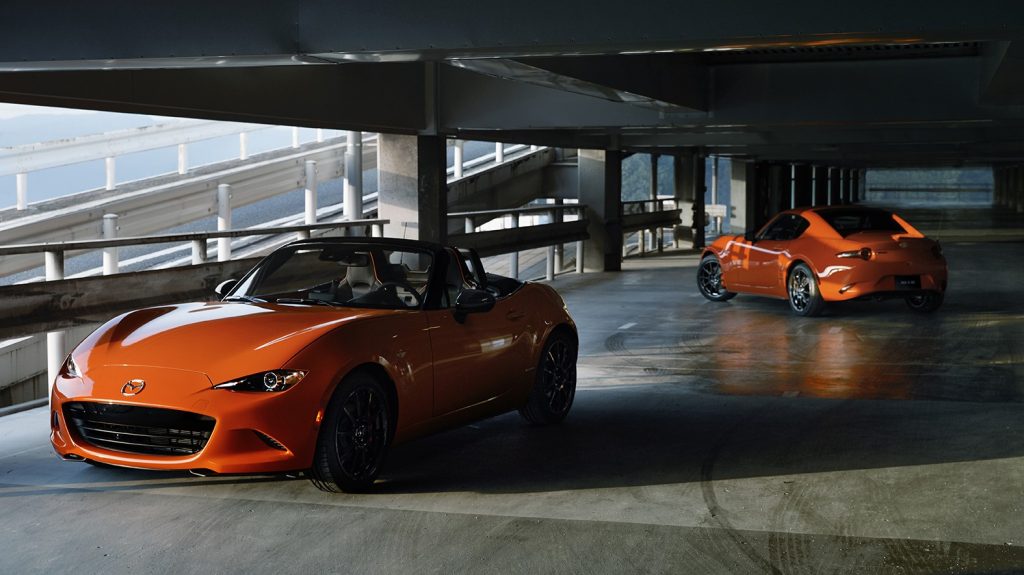 Its recipe for success? The Miata seats two and delivers great handling capabilities, adequate power and a serious driving fun factor.  A car loved by petrolheads all over the world.  One of the best little sports cars money can buy in terms of power, handling, build quality and that definite smile it puts on your face.

The MX-5 continues its legacy and has recently partnered with Fiat and Abarth from Italy in creating the 124 Spider.  An Italian bodied and tuned MX-5 available under the Fiat or Abarth brand.

The gorgeous retro inspired Fiat 124 GT is an MX-5 with some Italian character.

Perseverance And Determination Leads To Success

The perfection of the rotary engine demonstrated the admirable perseverance of Mazda.  However this spirit of perseverance and determination also led them to establish themselves as a manufacturer of sporty reliable cars in 1991.  They became the only Asian manufacturer to win the 24 Hours of Le Mans endurance race.  The winning Mazda 787B, also being the only car to win the race using a rotary engine.

Years of perseverance led to their success at the 24 hours of Le Mans in the Mazda 787B.

The 24 Hours of Le Mans focuses more on the reliability of a car than the fastest time or speed a manufacturer can achieve.  It requires competing cars to complete the most distance in a time of 24 hours.  A true test of efficiency and racing capabilities over time which only Mazda as Asian manufacturer has conquered.

After 100 years of Mazda, the KODO Design is their current spirit by which they craft their cars.

A design language seen in all new generation Mazda cars.  Cars with intimidating and aggressive stance.  Driving as they look.  This KODO spirit is also what shaped the Mazda Vision Coupé.  A car crowned “The most beautiful concept car of 2017”.  A vision we would not mind becoming reality in the near future. 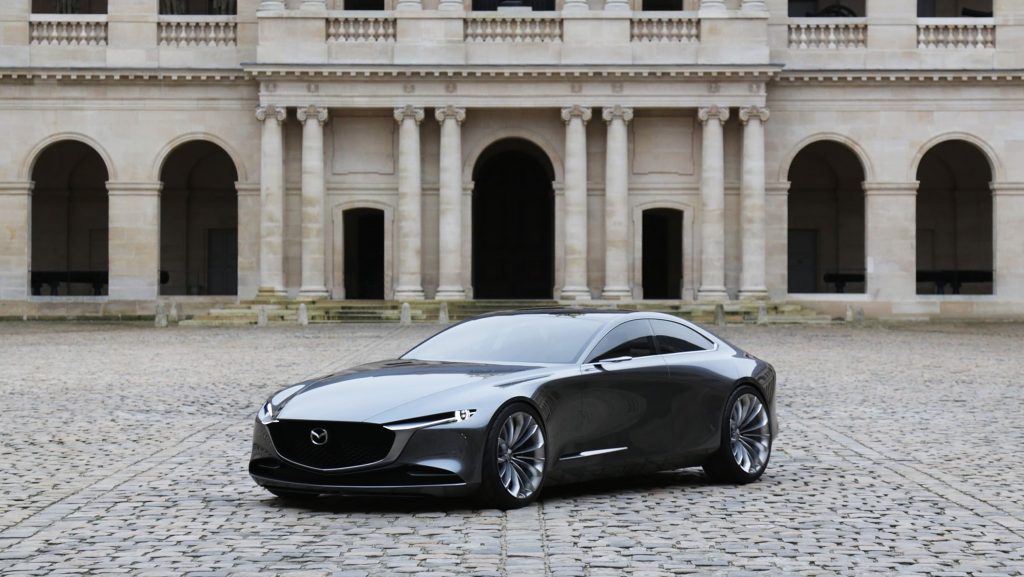 The award for “The most beautiful concept car of 2017” goes to: The Mazda Vision Coupé.

Mazda’s new strategy seems promising and exciting.  Its brand essence, “celebrate driving” pushes them in creating automobiles with a soul and bringing life into each and every car they make.  An element appreciated by true enthusiasts but forgotten by many big car manufacturers in the world today.  The 100 years of Mazda have given them a great legacy of creating avant gardiste cars and this spirit is still what is driving them forward.  We cannot but wait to see how they will amaze us with their new range of amazing cars for the future.