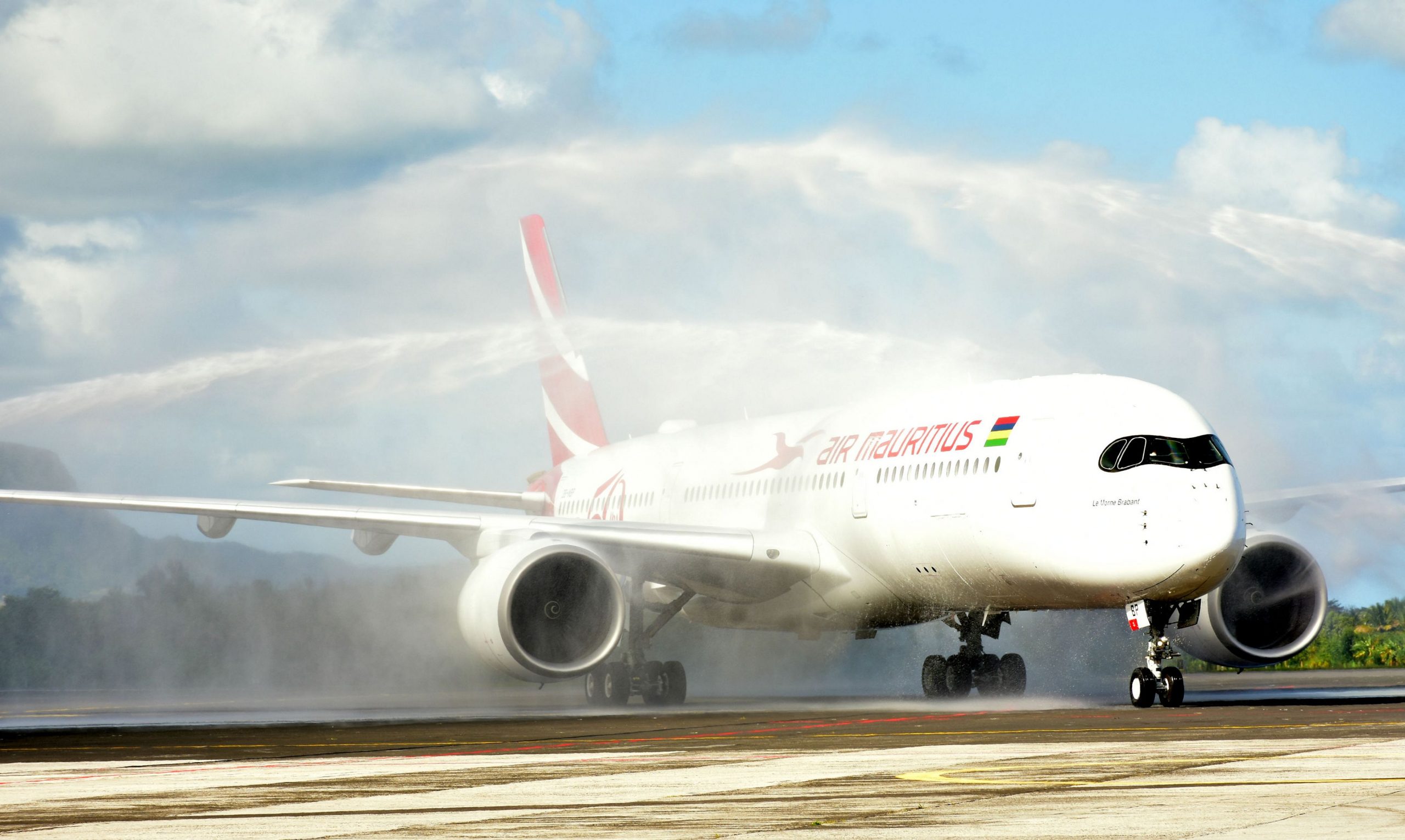 Air Mauritius is set on improving its passenger flight experience as it takes delivery of its first Airbus A350-900 XWB.  One of the latest aircraft to come out of the French manufacturer’s factory based in Toulouse.  Besides upgrading its current fleet, Air Mauritius also happens to be the first airline in the Indian Ocean to operate the A350-900 XWB.

The first A350 of Air Mauritius bears its name to one of the most iconic mountains of the island, ‘Le Morne Brabant‘.  A mountain with a strong connection to slavery and listed as a UNESCO World Heritage Site.  The mountain sits on the southern west tip of Mauritius and offers breathtaking views to people who hike to its summit.

On-lookers awaiting the arrival of the A350, flown by Captain Pramil Banymandhub were in for a little treat on the day.  The latter did not simply carry out a routine landing into the airport at Plaisance.  Instead he flew the approach into Mauritius and performed a fly-by over the runway before going around and eventually touching down at the airport.

Captain Pramil Banymandhub features amongst the most senior flight crew at Air Mauritius.  He was also one of the very first Mauritian pilots to fly for the company.  In fact, Captain Banymandhub throughout his career has flown every aircraft type in the fleet of Air Mauritius.  These include the Twin Otter in the 70’s, the Boeing 707 & 747 in the 80’s and this brand new A350.

The Airbus A350 will slowly (and sadly) replace the ageing Airbus A340-300 fleet at Air Mauritius.  An aircraft which is easily recognisable with its distinct four engines hanging underneath its wings.  A long serving flagship aircraft that has proven to be a workhorse to the company.  Connecting the island of Mauritius to even more destinations around the world.

The latter aircraft, first acquired in 1994, was also the first of its type to be operated in the Indian Ocean by the airline.  Its successor, the A350 promises to deliver a better in-cabin experience for its passengers and more fuel savings to the company than the A340.

What To Look Forward To?

The new aircraft will mostly fly long haul routes in a two class configuration.  Firstly, Business class with 28 seats and secondly, Economy class with 298 seats.  Passengers will enjoy the latest in-flight entertainment systems as well as Wi-Fi connectivity while relaxing in wider and comfier seats throughout both classes.

The aircraft’s design allows for less-rounded sidewalls, higher ceilings and wider panoramic windows which makes for a roomier cabin.  Ambient lighting and the aircraft’s ability to be pressurised at a lower altitude contribute towards enhancing in-flight experience and reducing fatigue.  Moreover, the A350 also claims to be four times quieter than its closest competitor, the Boeing 787 Dreamliner.

An Opportunity For Happier Customers

The Airbus A350, like its rival the Boeing 787, cater to the needs of modern day travel.  They promise more comfortable and enjoyable journeys on board whilst reducing emissions and saving more fuel.  The late 70’s through to the mid 90’s saw Air Mauritius mainly as a Boeing operator.  Since 1994, the company grew its fleet in favour of Airbus.  A relationship now strengthened with the arrival of the Airbus A350.  An aircraft we, the team at ISL AVENUE® cannot wait to experience.