We drove the 3 door and 5 door 3 cylinder turbocharged Mini One on a trip to London.  And what better car to choose other than a Mini whilst in England, especially London.  Taking inspiration from the original Mini, BMW, the marque’s new owner re-introduced the new generation Mini in 2001 as a small sporty hatchback.  But is the third generation entry level hatch as exiting as before? Is it as fun and as sporty to drive with one less cylinder and a lower displacement?  We let the streets in and around London decide. 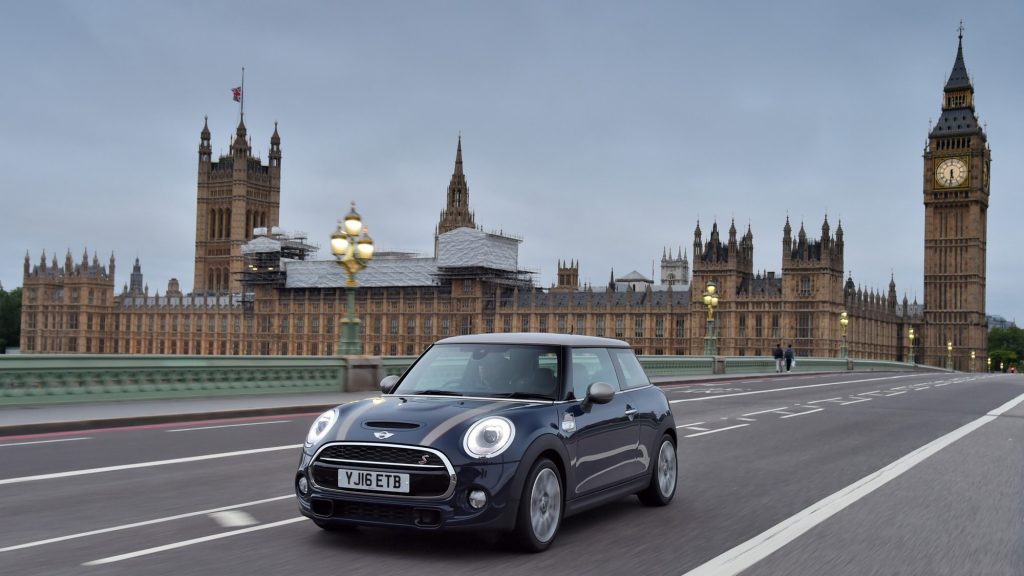 The Mini Seven pictured is a special edition Mini with a lot more features and trims but can the entry level Mini One be as fun?

All You Need In Town

It may come as a surprise but the new 3 cylinder Mini One is more powerful than its 97 horsepower 4 cylinder predecessor.  Thanks to being turbocharged it now develops just over 100 horsepower from its tiny 1.2 L unit.  Let’s face it, in city traffic this is more than enough horses.  The car also has an impressive mid range torque, allowing rather quick accelerations at low RPM for an engine that size. 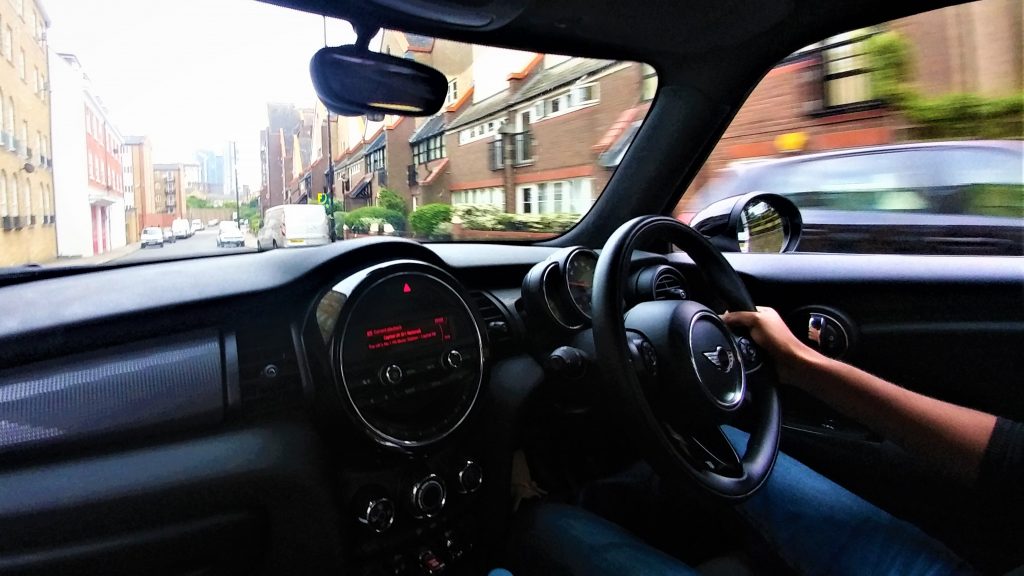 Driving through the streets nearby Canary Wharf, London © ISL AVENUE

The small hatch, as to be expected with Minis, was a treat to manoeuvre around the tiny streets and parking spots of London.  At red lights or in traffic, stick the car into neutral and the car’s stop/start feature kicks in.  A standard feature across all Minis in a bid to save more fuel and make it a better urban car.

But How Does It Fare Out Of Town

The Mini is an urban car but it is famous for taking on twisty roads and putting a big smile on your face.  To test out the potential of each car, we headed out onto the motorway and into the country roads out of North London. 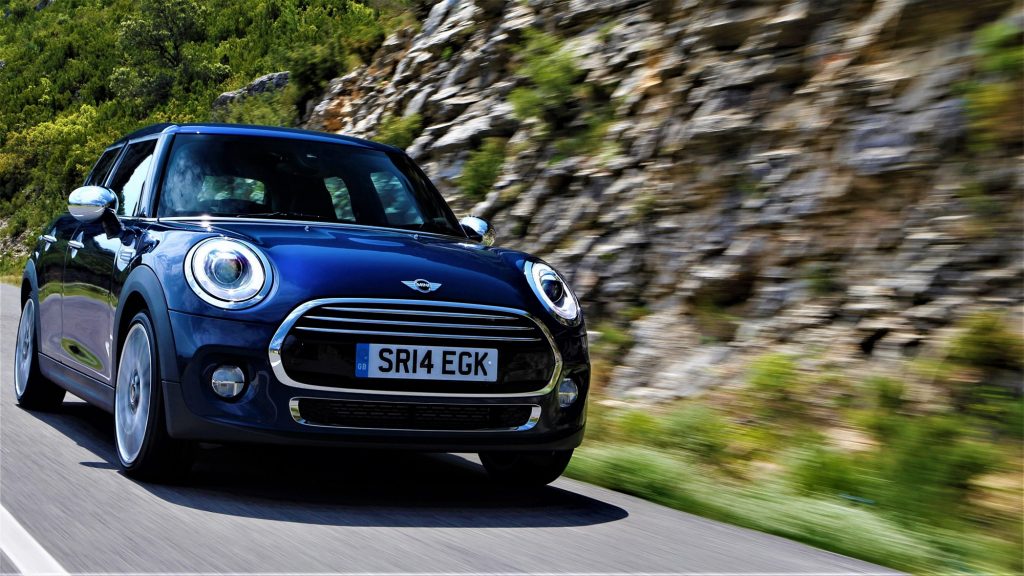 The throttle response is impressive and the car feels quicker than what the spec sheet claims.  It has a pleasing and rather deep exhaust note.  Roll the windows down and you hear the subtle sound of the turbos while cruising.

Astonishingly, the 5 door was more thrilling to drive around twisty roads.  Sounds weird?  Our 3 door car was equipped with standard 15″ alloys.  The 5 door performed better as it was equipped with bigger tyres and alloys.  An option we highly recommend.  The bigger alloys uplift the look of the car and gives it the go-kart sharpness and handling Minis are famous for.

A Basic Cooper With Some Options

All BMW Minis take styling cues from the original classic Mini.  The third generation Mini One is no different.  It is fairly difficult to distinguish the one from its slightly more expensive sibling, the Cooper.  Both cars are fairly similar in shape and size.

New generation Minis all take inspiration from the classic Mini

The One sits slightly higher than the Cooper.  Unlike the latter’s two tone colour scheme, the entry level Mini’s roof cannot be painted a different colour.  Other than that there isn’t much for the average eye to distinguish between them.  Upgrade your alloy wheels and a few bits here and there  and you somewhat have a cooper for less.  Push too hard on the options list and you may be better off buying a Cooper itself. 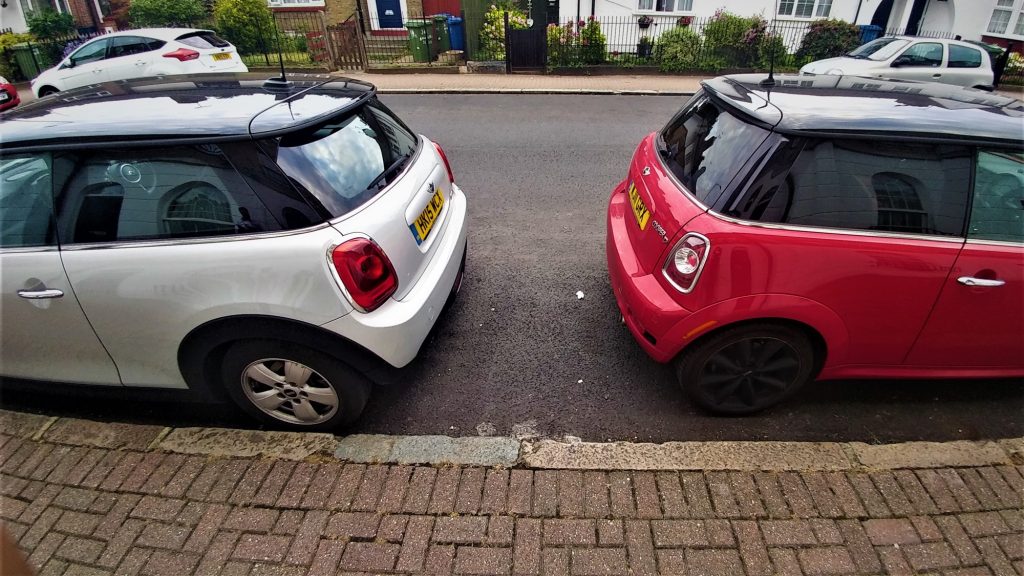 Left: The Mini One – We suspect the roof’s been painted by a third party ; Right: The Mini Cooper D © ISL AVENUE

Cheaper But Not Cheap On The Inside

The Mini One is an entry level car and is the cheapest way into the brand.  However, rest assured for its interior does not feel cheap in any way.  The ergonomic and very supportive seats cocoon you in a rather luxurious cabin.  The attention to detail and the use of high quality materials along with its sophisticated retro interior styling with touches of chrome makes the One a great car for the money.  It also mostly has all the standard features you may need.  Even start/stop mentioned earlier and traction control. 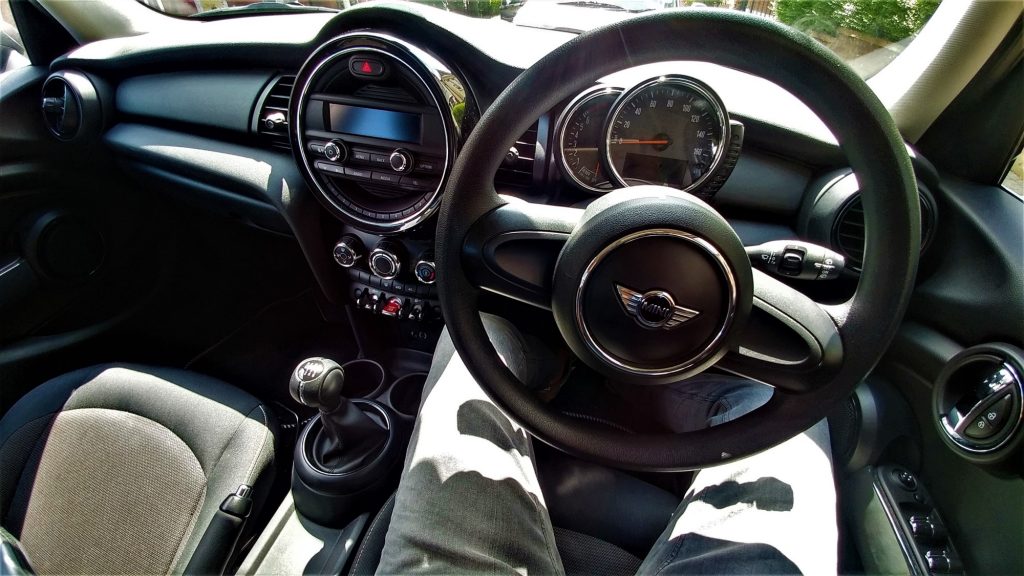 Choosing between the 3 door and 5 door is a question of weighing down style against practicality.  The 3 door’s rear seat is surprisingly spacious due to the boxy dimensions of the car.  The 5 door obviously has slightly more space and is more practical to get in and out with its extra doors.  An obvious choice for small families who want such an iconic car brand without its practicality issues.  If you want to look cool in the city, go for the 3 door though. 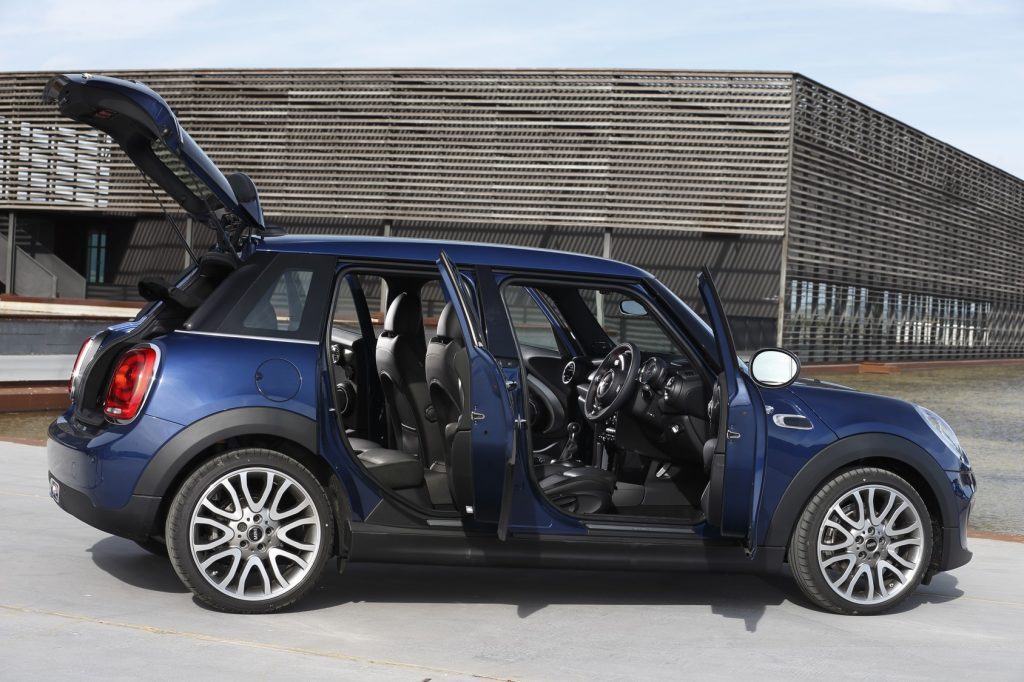 If you can accept the looks, the Mini 5 door offers you more practicality than the more stylish 3 door

The Mini One is somewhat of an homage to the original Mini of the 1960’s.  An economy car with lower displacement but still delivering an exhilarating experience.  Just remember upgrading those alloys.  There isn’t much separating the Mini One from the Mini Cooper, except for ride height, trim level and a few more horsepower.  It continues a legacy of great small cars re-invented by BMW.

The Mini feels at home in London.  Tiny streets, tight parking, small turning circles, it can tackle it all.  The Mini One to us is an urban economy sport hatch.  And overall they both certainly did not let us down.