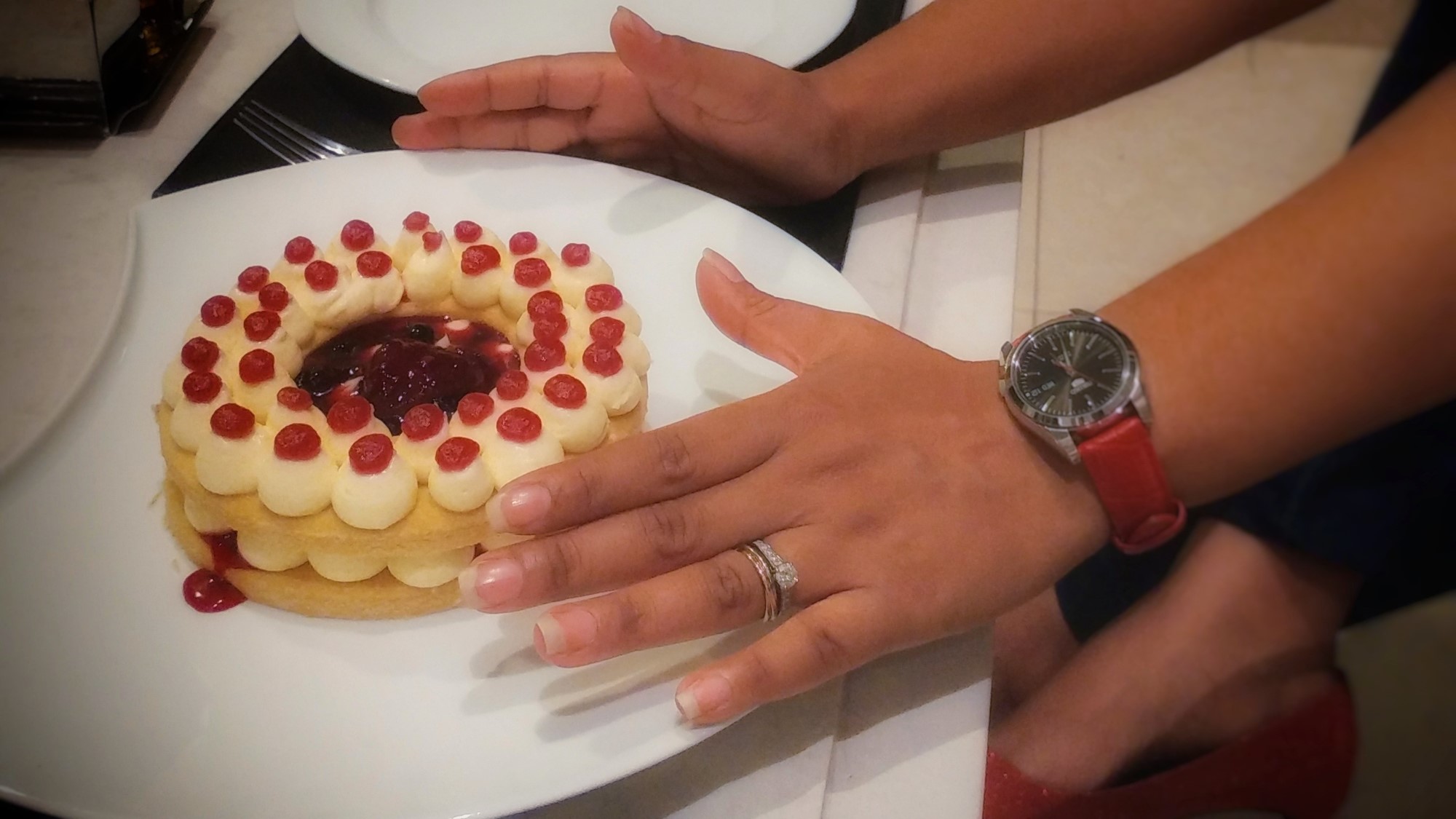 The Labourdonnais Waterfront Hotel at the Caudan waterfront in Port Louis created a dessert for two this whole Valentine’s month.  A ‘revisited’ Puits d’Amour.  Not to be confused with the French jam-filled puff pastry, this one is a different take on the Mauritian Puits d’Amour.  A dessert that got us “revisiting” the Labourdonnais Hotel twice within a week.

Traditionally the Puits d’Amour in Mauritius consists of a sweet crust pastry base filled with traditionally a crème legère which is then usually topped off with dried coconut sprinkles and a candied cherry.  A favourite of the missus who’s been on the quest of finding the perfect Puits D’Amour for quite some time.  One reminiscent of her childhood.

I could not resist the offer upon hearing about The Labourdonnais Hotel’s take on my wife’s favourite childhood dessert.  I absolutely had to book a table.  As a sweet treat to her for Valentine’s day and with the hope that the dessert lived up to my expectations or rather hers.  We have always been a fan of the hotel’s desserts and so far they never disappointed us.

The revisited Puits d’Amour was visually unlike any traditional Mauritian Puits d’Amour.  It consisted of even dollops of crème legère layered between discs of sweet crust pastry.  The hollow centre filled with a berry coulis from its base and topped with fresh strawberries.  Truly visually revisited.  But how did it taste? And did the Labourdonnais Hotel’s pastry chef manage to fulfill my wife’s quest for the perfect Puits d’Amour?

I am glad to report; Yes! Absolutely! The very first spoon of crème légère was pure bliss to her.  Her first reaction came instantaneously claiming:

This is the real deal! This is exactly how a Puits D’Amour’s cream should taste.

The cream was undoubtedly velvety and more refined than those found at common ‘pâtisseries’ around the country.  Its crust, baked to perfection; Not too crumbly not too brittle.  The use of strawberries instead of cherries probably enhanced that experience further.  The dessert had the right balance of sweetness.  The crust complementing the cream and the preserve adding a little tartness.

We were so pleased with how the Labourdonnais hotel executed this dessert that we convinced some friends and family to give it a try before Valentine’s month was over.  The ‘Puits d’Amour revisité’ was only available from the 7th of February until the end of the month.

We eventually booked another table at the hotel’s Coffee lounge and got the team to have a go at it.  The limited to February only dessert also came with two Vanilla Lattes which they happily swapped for some of us espresso lovers.  Service done right; Served right as you would expect from The Labourdonnais Hotel.

Despite being sort of deconstructed from what a typical Mauritian Puits D’amour looks like, it ticked all the right boxes.  It is shame that this particular dessert was limited to a month only as this makes our quest on-going.